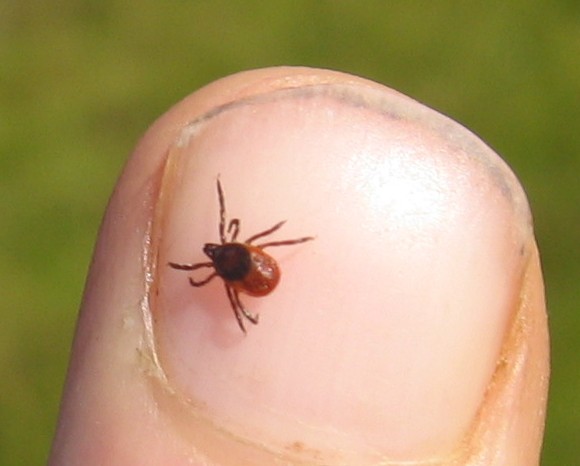 On a springlike day in late February, Shannon Cantner’s daughter, Emma, visited friends in the Newton/Ransom area, taking advantage of the 60-degree warmth to romp in the woods.

Although Emma is only 5, she is well-schooled in the need for a “tick check” when she comes in from the outdoors, her mother said.

“You might get one or two ticks on you every now and then,” said Cantner, a Ransom Twp. resident who is office manager for Countryside Conservancy.

This time, though, Cantner was stunned. A check of her daughter and her two playmates turned up more than 35 ticks.

“I have never seen that,” Cantner said. “I have always been in the country, and I’ve never come across this many at once.”

After a relatively mild winter that included lengthy stretches of above-average temperatures, anecdotal evidence suggests ticks have not only made their presence known earlier than usual this spring in Northeast Pennsylvania but also in numbers that surprise even veteran outdoors folks.

At Lackawanna State Park, an abundance of ticks prompted a volunteer trail stewardship organization that maintains 26 miles of trail on park and Countryside Conservancy lands to delay a “trail build” scheduled for Monday.

North Abington Twp. resident Joe Tierney, who has overseen the Lackawanna State Park Trail Care Crew since 1990, said it is the first time ticks have caused the group to cancel an event.

“Going back to 1990, ticks weren’t even an issue,” he said. “I would say definitely in the last five years, maybe 10, there has just been an explosion of them.”

He decided to postpone the trail work after he and other volunteers were out last weekend doing preparation and he pulled at least 20 ticks off his clothing.

“And I wasn’t crawling through the brush,” he said. “I was on a trail where the brush had been cut back over the winter time in preparation for creating the actual trail bed.”

Most of the ticks Tierney found appeared to be black-legged ticks, sometimes called deer ticks. That is the species that carries the bacteria that causes Lyme disease.

“I said at that point I just can’t have my volunteers in that type of environment. ... We don’t want the unnecessary risk,” he said. “So we’re just going to postpone it to midsummer when, hopefully, the ticks have gone through their first breeding cycle.”

Veterinarian Ana Ortiz of the Abington Veterinary Center in South Abington Twp. said there is always a sharp increase in tick activity around the start of spring. She has not noticed a marked difference in either the timing or the incidence of ticks this year compared to last spring, which also followed a mild winter.

“It’s about the same, but it’s still quite an elevated number,” Ortiz said.

Charles Bier, senior director of conservation science for the Pittsburgh-based Western Pennsylvania Conservancy, said the seeming early emergence of black-legged ticks in particular is probably more a matter of perception.

The adults of the species are usually present and will be out searching for a host to attach to — including humans and pets — any time the weather is warm enough from October into the following May or possibly June, he said.

During a typically cold winter with sustained low temperatures and snow cover, the ticks can lie dormant and people might not see any from December until March, Bier said.

“But if you get a couple of warm days up in the 40s or 50s, they can be quite active. With the kind of winter we’ve had, that’s what’s been happening,” he said. “I think it’s mostly a case of people having had more opportunity to interact with them because of the weather and the adults have been up and searching for hosts.”

Although December temperatures locally were close to average, there were 15 days in January and 17 days in February with a high of 40 degrees or warmer, according to National Weather Service records. February had 11 days with highs of at least 50, including six when the temperature topped out in the 60s or 70s.

Bier said while adult black-legged ticks can be annoying and “are bothersome if they bite you,” they are large enough to be easily spotted if they are on your body or clothing.

The bigger concern are the nymph-stage ticks, which usually emerge around May or June and are prevalent through July and into August, he said. Like the adults, the nymphs can carry and transmit Lyme disease.

“That is the dangerous part of the life cycle because they are so small — they are really small,” Bier said. “Those can get on you and you may not even know they are on you.”

Pennsylvania has led the nation in Lyme disease cases for several years, including 7,487 confirmed cases in 2014, according to the state Department of Health.

Preliminary reports from the U.S. Centers for Disease Control show the number rose to nearly 9,000 cases in 2015 and more than 12,000 in 2016, although health department spokeswoman April Hutcheson cautioned the CDC totals include suspected as well as actual cases and may not be accurate.

What state health officials know for certain, she said, is that Lyme disease-carrying ticks can now be found in every county in the commonwealth.

“What we always recommend to folks is to remain vigilant. ... The personal protection measures you are going to take when you’re outdoors are really, really important because there isn’t any part of Pennsylvania where there aren’t ticks present with Lyme,” Hutcheson said.

Lyme disease is treatable, but the key is early intervention to prevent it from becoming a chronic illness, she said. Anyone who develops a bull’s-eye rash, one of the characteristic symptoms of Lyme disease, should seek medical attention.

Tierney said it is not a danger people should dismiss.

To reduce the risk of tick bites

• Avoid tick-infested areas, especially from May through July. If on a trail or path, walk in the center to avoid contact with overgrown grass, brush and leaf litter at the edges.

• Wear light-colored clothing so ticks can be spotted more easily. Tuck pants legs into socks or boots, and shirts into pants. Tape areas where pants and socks meet.

If you find a tick attached to your skin

• Don’t panic, but remove promptly. Ticks must usually be attached for at least a day before they can transmit the bacteria that cause Lyme disease.

• To remove, use fine-tipped tweezers to grasp the tick as close to the skin as possible and pull upward with steady, even pressure. After removal, thoroughly disinfect the bite.

• If you develop a bull’s-eye rash or other symptoms such as fatigue, muscle and joint pain or swollen lymph nodes, seek immediate medical attention.

Article re-posted from The Times-Tribune by David Singleton.