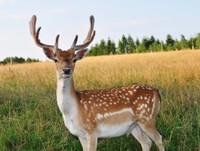 A deer collision can occur in any state, but there are some states that have larger deer populations and therefore, a higher risk of deer collisions. States in the northeast and states in the mid-west are usually seen as the most at-risk states and this year, the number of overall collisions in the U.S. is up 7.7 percent from last year.

To narrow the top five down, State Farm used insurance claims information and licensed drivers counts from the Federal Highway Administration to calculate your risks:

If you live in Pennsylvania, your chances of colliding with a deer are 1 in 76 within the next 12 months (down from last year).

Michiganders have a 1 in 72 chance of hitting a deer within the next 12 months (up from last year).

In the next 12 months, 1 in 71 people are estimated to experience a deer collision in Iowa (down from last year).

If you live in South Dakota, be aware that your chance of colliding with a deer in the next 12 months is 1 in 68 (up from last year).

Topping the list for six years in a row, West Virginians’ chances of a deer collision are actually much higher than any other state: 1 in 40.

According to data, November is the month that most deer collisions occur. In fact, State Farm says a collision is “three times more likely to occur on a day in November than on any other day between February 1st and August 31st.” The company also estimates that 1.23 million collisions were caused by deer (both directly and indirectly) between 2011 and 2012.

With that said, our deer fencing company wants to remind you to drive safe this deer season. For some great tips on what to look for, read our 10 Tips to Avoid a Deer Collision blog.