About The Longhorned Tick

News outlets across North America are reporting about a new, exotic tick species that has found its way over to the United States from the Pacific Islands including Australia, New Zealand, Fiji and Hawaii . 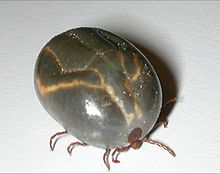 Longhorned Ticks, also known as the cattle tick, is a parasitic arachnid that chooses livestock (horses, sheep, pigs and goats) as its primary host; but will also reach out to deer, birds, dogs, cats and humans as secondary hosts.

If the tick is infected with a tick-borne disease, then it can pass over an animal disease called theileriosis to cattle. In addition to fever, the cattle will have considerable loss of blood and death of calves.

This type of tick is a growing concern for dairy farmers and sheep farmers who may experience a loss in milk production and wool quality because of tick bites on their livestock animals.

To keep ticks away, farmers need to rid deer and other tick carrying animals from farms with farm fencing and other deer-resistant plants.