Currently, more than 25 tick species have been identified in Pennsylvania; but of these, four species of ticks account for nearly 90 percent of all submissions to be identified by doctors. The four common ticks of Pennsylvania include: The Black-legged Tick, The American Dog Tick, The Lone Star Tick, and the Ground Hog Tick. 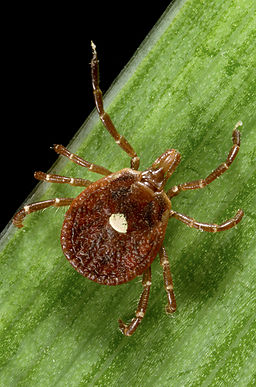 Ticks stay active by attaching themselves to warm-blooded hosts including deer, livestock and humans. Some ticks do carry tick-borne diseases including Lyme Disease and Rocky Mountain Spotted Fever; but immediate, physical reactions may not take place for several weeks or months. This is why Deerbusters suggests bitten individuals get tested for Lyme Disease among other vector diseases.

The Black-legged Tick is found throughout the East Coast and, in most cases, attaches itself to rodents, birds and white-tailed deer before humans. These types of ticks are mostly found in wooded areas and brush locations. Most counties in Pennsylvania have reported cases of Black-legged ticks.

Given it's name, the adult  American Dog Tick is commonly found on dogs and can be recognized by white markings on the back shell. It is found throughout the eastern two-thirds of the United States and has been reported in most Pennsylvania counties. Common hosts include: humans, cattle, squirrels, fox, wolves and groundhogs.

Although the Lone Star Tick is commonly found in Texas and Missouri, this type of tick has been discovered in southern counties in Pennsylvania near urban areas. The Lone Star Tick can cause tick paralysis in both humans and dogs and feeds on small animals.

The Ground hog tick is found in the Rockies near South Dakota but has made its way to the western and northern portions of Pennsylvania. This tick will feed first on groundhogs but will occasionally seek birds, small animals and humans. This type of tick is not commonly known to carry Lyme Disease.

Ticks are most common from March-May and August through November. This is why Deerbusters recommends that outdoor enthusiasts and gardeners perform a thorough tick-check after extended periods of outdoor activity. Remember, you will have less than 48 hours to remove the tick before possible transmission of Lyme Disease.