Pennsylvania has reported the most Lyme Disease cases for 10 consecutive years; and 2016 topped over 12,000 cases alone according to the Centers for Disease Control and Prevention.There were 9000 cases in Pennsylvania in 2015. 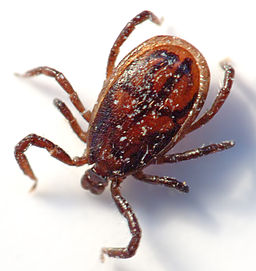 “Temperature-wise, it’s right, geography is right, and the difficulty is not always knowing that you have been bitten by that tick,” said Matthew Howie, the medical director of the York City Bureau of Health.

The number of Lyme cases are three times higher than cases reported in New York, second-highest in the nation with 4,002 this year, and New Jersey which has 3,850 infections for the third-highest total.

“We also have a lot of trees, a lot of deer, and a lot of ticks that go with the deer,” Howie said, “so it’s kind of a crossroads of all of those factors that kind of need to be connected.”

People don't usually think 'ticks' when they think wintertime; but the truth is that ticks do not die in the winter; instead they become dormant. They will hide under leaves for warmth and feed on warm-blooded mammals - deer, humans, cattle.

Outdoor enthusiasts are advised to spray insect repellent on themselves during long periods of outdoor activity and perform a thorough tick check on themselves and pets after activities.

If a tick is found buried under the surface of the skin, grab is gently with a tick removal tool and bring it to a doctor for evaluation. Here are steps to safely remove a tick from the skin.